Electric Ladyland came out in 1968 and is one of the first rock double albums, the first is considered to be Bob Dylan’s «Blonde on Blonde» from 1966. Electric Ladyland spans over a large spectrum of sounds and music styles, and a lot of different musicians were involved in creating it as well. You have your experimental soundscapes in «And the Gods made Love» and «Moon turn the tides, gently, gently away», your slow blues in «Voodoo Child», your hit songs in «Cross Town Traffic» and «Gypsy Eyes», political comments in «House Burning Down», brilliant rock guitar in a cover of King’s «Let the good times roll» etc etc.

The album was made during turbulent times for Jimi. Chas Chandler, who had «discovered» Jimi, and brought him to England, left him during the sessions. He was also very important in shaping Jimi into the brilliant songwriter he was, and he produced the two first albums. Halfway thru the sessions of Electric Ladyland Chas bailed out, and he also sold his shares in the management of Jimi to Michael Jeffrey.
Jimi and Noel were also having difficulties in cooperating, and Jimi would often record the bass himself, and at some point Noel had enough, and he quit the Experience. 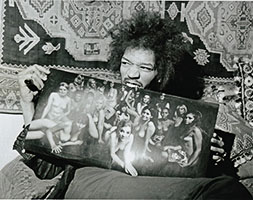 As with «Axis: Bold as Love» there was to be a controversy about the cover. Jimi had actually made detailed instructions on how he wanted the cover art to be designed. He wanted to use photographs by Linda Eastman, later McCartney. He sent over sketches from New York back to England, but the record company made their own arrangements with a photographer. The name «Electric Lady» was a term Jimi had started to use instead of «groupies», and the idea was to have Jimi sit in the middle of a group of «electric ladies». But Jimi didn’t show for the photoshoot, and the girls were asked to take their clothes off for more money. The cover caused quite a controversy when it was released in England, and some shops refused to sell the album, and some put it in a paper bag. In the later US edition it came out with a pictures of Jimi and the Experience. These were taken by Karl Ferris, the same photographer that took the photos for the US version of «Are you Experienced?».