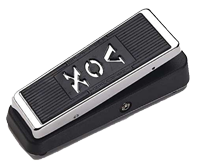 A company owned by Vox, Warwick Electronics Inc./Thomas Organ Company made the first prototype of a wah wah in November 1966. It was made from a transistorized MRB (mid-range boost) potentiometer bread-boarded circuit and the housing of a Vox Continental Organ volume pedal. Since it was inteded for wind instruments, to simulate the mute, it was decided to market the wah-wah pedal using Clyde McCoy’s name for endorsement. It was realeased to the public in February 1967.

Jimi jused the Vox V846 on his second album Axis: Bold as Love, on the song Little Miss Lover. The album was realeased December 1st 1967 in the UK. On later albums he used it on numerous tunes, and it became almost his signature. On the opening of Voodoo Chile (Slight Return) on the album Electric Ladyland, he hits the strings while muting them and uses the wah wah to obtain that special effect.

Live he used his wah wah first in the chain, before his Fuzz Face. When the Fuzz Face is on at the same time as the wah wah, the wah wah loses much of its effect, specially in the middle area. The sound becomes very trebly, but since the Fuzz Face is rather «muddy» and boomy sounding, adding the wah wah makes a really cool sound, almost like an Octavia. You may hear this on for example the beginning of the first solo on Power of Soul, from the Band of Gypsys album. 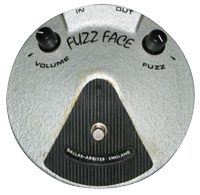 The first Fuzz Faces came under the name Arbiter Fuzz Face in 1966, the second edition added the name Dallas. The original versions of the Fuzz Face were equipped with PNP Germanium transistors. There were at least three types used: NKT275, AC128, and SFT363E. As time wore on, Germanium transistors were slowly being phased out in favor of the more stable and consistent Silicon versions. As a result, Dallas-Arbiter began equipping the Fuzz Face pedals with these new transistors. This happened somewhere around 1968, and from Axis: Bold as Love and on this is the version Jimi used.

The Fuzz Face was a very important part of Hendrix’s live sound. The Fuzz Face cleans up very quickly when the guitar volume is turned down, and is turned «off» at volume 8 on the guitar. Because of that feature, the Fuzz Face may be turned on most of the time, and still not be heard, so to speak. It gives a certain flavor to the sound, thou. It is almost like having an on/off switch on on your guitar, and Jimi used this extencively.

The early Germanium versions were quite unstable when they were hot, and since the pairing of the two transistors is very important, there were differenses between units. This is specially true regarding the early Germanium ones, and Jimi jused two travel with quite a few units, because they were prone to malfunction, and he used to try different ones to find the one suited best for the occasion. 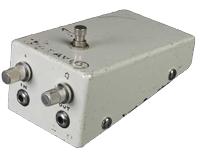 It was Roger Mayer who invented this wonderful guitar effect, and gave it to Jimi Hendrix early in 1967, at that time exclusively. He introduced himself to Jimi after a consert in London in January 11th 1967. Jimi loved the sound of the Octavia, or Octavio wich he actually called it, and re-recorded the solo on Purple Haze with the effect on Feb 3rd 1967.

This was an early version of the effect, and it was actually in two different boxes, one containing the octavia effect, the other the distortion. This version, the first generation, was thrown in the bin by Roger Mayer and many later generations came about.

According to Roger Mayer himself the Octavia was under constant development up to about 1970, but the unit was more or less as we know it now by late 1967. The first units didn’t have the wedge shaped box, and they didn’t have a footswitch, as these were designed for the studio only. Late in 1967 Mayer made 5 units in the famous wedge shaped box, at that time manufactured by his fathers electronic company

The first units used germanium transistors and ferrite transformers. At the end of 1968 five or so units using silicon transistors and iron type audio transformer were produced. These were more rugged, and was better suited for stage work and touring. Syd Barrett of Pink Floyd, Steve Marriot of Small Faces, Peter Frampton of Small Faces, Keith Relf of Yardbirds and of course Jimi obtained these units.

The unit obtained by Keith Relf is probably the unit that was brought to Tychobrahe for repairs, and one of the engineers there copied the unit, and they sold it under thir own name. At that time Roger Mayer did not sell the unit, and Tychobrahe actually made the first commercially available version. According to Roger Mayer this was a unit designed to work at its best at 24V, not 9V. Roger later manufactured the Octavia under his own name, but then it was manufactured int the cool Rocket enclosure, that looks like a spaceship. You can still buy this version from Roger Mayer, or his later modified Vision Octavia, that has a tone control added.

The Octavia sounds best on a Fender Stratocaster with the neck pickup enganged. It comes to life at around the 8th fret, and has the most pronounced effect at the 12th to 15th fret. The last section of the solo in Who Knows from the Band of Gypsys album is a great example of how this effect can sound in the hands of a master like Jimi, with an effect that was in many ways made specially for him.

The Univibe effect saw the light of day in 1968. It was invented by Fumio Mieda, and manufactured by the Japanese company Shin Ei. The effect sold in the US as Univox Uni-Vibe, but the rest of the world knew it as Jax Vibra-Chorus. Jimi owned both Uni-Vibe and Vibra Chorus editions.

The effect is based on a pulsating light bulb wich is surrounded by four light sensors. It is a totally analog machine that produces a warm and shimmering sound, unlike a digital effect.

The unit consisted of the effect itself, and a footpedal that was used for controlling the speed of the pulsating light, thus the speed of the «rotating» speaker effect. It also functioned as an on/off switch, as the effect was turned completely off with the pedal in the back position. The effect was not true bypass, and mellowed the guitar sound to a certain degree even when not enganged. Jimi seemed to like this sound.