When Jimi first arrived in London he were given Burns amplifiers. These were 30 watts, and didn’t hold up to the standards of the Experience, and they used to kick them around the practice room. Hints were taken, and Jimi got two Marshall Super Lead «stacks» that he used to daisy-chain together. They also got one Marshall PA «stack» with two Shure microphones, and this were the setup they used in the early days, and also took with them to France on their first trip overseas.

Jim Marshall’s first amplifier was the JTM 45. It is based on the Fender Bassman circuit, the 5F6A version from the late fifties. The 45 watt amp were produced both as a head with separete 4×12″ speaker cabinet, and as a combo with two 12″ speakers, known as the Bluesbreaker due to Eric Clapton using it on the «Beano» album with John Mayalls Bluesbreakers.

Anyway, the rock and roll guitarists of the day, including a certain Pete Townshend, had a craving for more power. And Jim Marshall would give it to them in 1965 in the shape of the 100 watt JTM 45/100 head. In 1966 the successor came, the mighty 100 watt Super Lead amplifier. Placed on top of two 4×12 speaker cabinets this were known as a Marshall «stack».

Marshall made both 50 and 100 watt versions of this amp, but Jimi always prefered the 100 watt model. In the days before massive PA-systems, the guitar sound came exclusively from the amp, and Jimi jused three 100 watt stacks, whitch is three heads and six speaker cabinets. This setup must have been extremely loud, but the sound of three Marshall stacks is of course rock and roll heaven! 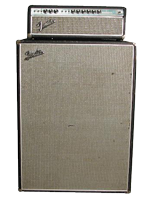 Jimi aquired new Fender Dual Showman amps in 1968. He would typically use three of these 100 watt amps with cabinets containing two 15-inch J.B.Lansing speakers. These amps were used in the studio, and on the 1968 Experience tour, together with Marshalls and Sunn.

The Dual Showman was, according to himself, created for surf guitarist Dick Dale. It was very powerful for its day, and still is. It delivers 100 watts, peaking on 180 watts. The name Showman was made up by Leo Fender himself, because Dale was such a showman in Leo’s opinion. The twin 15″ JBL speakers inside the cabinet is fitted with extremely heavy magnets, 12 pounds each. This made the cabinets very heavy.

Hendrix made a deal with Sunn Amps after the Monterey Pop Festival that they should supply the Experience with equipment for five years in exchange for his input on development.

Photos from this period showes a mix of Marshall, Fender and Sunn amps and speaker cabs. After about a year Hendrix began using Marshalls exclusively on stage. The Sunns didn’t take the beating of the road very well, and they were quite noisy. The feedback and overdrive from the Marshalls suited his style better, and he used this amps live exclusively for the rest of his career.