Jimi’s first ever Fender Stratocaster was a white 1964 model with rosewood fingerboard. He obtained it in New York, from Manny’s Music, with funds from his girlfriend Carol Shiroky. It cost $289. He actually bought it from Jeff Baxter, later of Steely Dan, who was working at Manny’s as an assistant, and he remembers the incident clearly.

Jimi had, at the time, in his possesion a Fender Duo Sonic witch was owned by Curtis Knight. Jimi wanted to start his own career, and wanted his own guitar, and had allways dreamt of a white strat. So that was his guitar when Chas Chandler saw him at the Cafe Wha in -66, and it was the guitar he brought with him to London in September 1966.

He played it at London’s Bag O’Nails in November 1966, and was his main guitar at the time. He also used a similar white strat, but with tortouse pickguard around the same time. By January 1967 he seemed to have traded his white strat for a sunburst one. It’s whereabouts is not known.

This is the guitar that Jimi first set fire to. It happened in March 1967, at Finsbury Astoria, London. It is a 1965 sunburst Stratocaster, and it was gone for 40 years, believed to be lost. It surfaced as late as 2007, and the story is that after Hendrix set fire to it, it was retrieved and returned to the management office. When the management changed their offices it endend up at Noel Redding’s flat. Tony Garland took it later to his flat, and it was stored in his parents garage in Hove in Southern England until it was discovered by Garlands nephew in 2007.

Jimi Hendrix played the Finsbury Astoria on the opening night of the Walker Brothers tour on 31st March 1967. Only allowed into the UK on a temporary visa, Hendrix was determined to leave an indelible impact on all who witnessed the performance. He instructed close confidante and press officer Tony Garland to buy lighter fluid from a local hardware store, and at the end of his show Hendrix re-defined the limits of live performance forever. Flames flew into the air as Hendrix set fire to the base of his Fender Stratocaster – and the astonished audience looked on as the American renegade was ushered off-stage by petrified venue staff – and taken to hospital with minor hand injuries.

This is the only surviving guitar in one piece that Hendrix burnt, the other ones he also smashed to pieces. 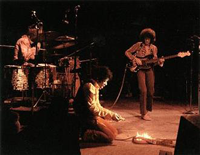 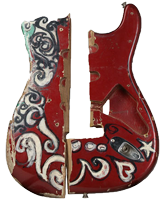 There are two strats that many people seem to confuse. They are quite similar. The first one is a red strat smashed in Saville Theater, London, on June 4, 1967, 9 days before the flight to the Monterey Pop Festival. The other one, also a red strat, but overpainted with white on the front and also with a very similar painting, is the one he burned and smashed in Monterey.

The strat he smashed at Saville Theater was a 1956 model. The way it was painted shows that it must have had a deep meaning for Jimi to do this. Compared to the Monterey guitar, the Saville has a more meaningful look to it, and also has lyrics on the back. The Monterey guitar on the other hand seems to have been done more hastily, and also lacks the lyrics.

The significance to this guitar may be the fact that Jimi was leaving for his home country, and in a state of gratitude and thankfulness for the reception he got from the English audience he decided to sacrifice something that he loved dearly, his Stratocaster.

The poem on the back reads:

May this be love or just confusion
Born out of frustration
Wracked feelings
of not being able to make true physical
love to the universal gypsie queen of
true, free expressed music
My darling guitar, please rest in peace.
Amen.

The show in Saville Theater was three days after the release of The Beatles’ «Sgt. Pepper» album, and Jimi started the show with a cover of the opening song «Sgt. Peppers Lonely Hearts Club Band.» All of The Beatles were actually in the audience, and to cover one of their songs three days after its release with them in the audience was one of the gutsiest moves Jimi did in his whole life. If he had played an inferior version, or done an uninspired job, the embaressment might not have been overcome. Anything less than brilliance would have been catastrophy, with Beatle manager Brian Epstein being the owner of the theater, and the Beatles present. To pull off a thing like that takes complete and total confidence, and Jimi had that. He was fearless. Not only did he cover the song, but he had already come up with a new arragement, and added a killer solo complete with feedback.

The Experience was invited to a party at Epsteins house after the show, and Paul McCartney opened the door. Handing Jimi a joint he said: «That was fucking great, man.» Paul has later stated that the cover was one of the greatest honors of his career. 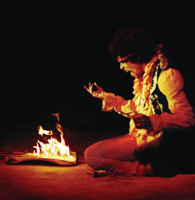 Jimi didn’t actually play much on this guitar during the appearance at Monterey Pop Festival. He played the entire show on a black maple neck strat, but switched to this one for the grand finale: «Wild Thing,» including burning and smashing the guitar in an incredible act of showmanship.

The Montery Pop Festival was a new beginning for Jimi. He was famous in UK and Europe, but was practically unknown in the States. He knew that it was no guarantee that he would be famous in the States just because he was in the UK. He wanted to do something special. He spent the Sunday afternoon painting his strat with the same swirly colors that he had done for the successful gig at the Saville Theater two weeks earlier.

There was no exact lineup for the Sunday gigs. Ravi Shankar was to open, and the Mamas and the Papas was to close the festival, but both the Who and the Experience were to play, and it was not decided in what order. The problem was nobody wanted to follow the other group. It came to a discussion between Jimi and Pete Townsend, and Pete Townshend won the debate, in the sense that they both agreed that the The Who would be first on. Jimi then stood up on a chair in the dressing room and played some incredible guitar, and said «OK, but then I’m gonna pull all the stops!»

After an incredible performance by The Who, the Experience came on stage, and Jimi played one of his best gigs ever. When he put fire to his painted guitar and smashed it to the floor in the last song «Wild Thing,» a cover of a Troggs tune, people in the audience were in total shock and awe. Some were running up and down the isles in excitement, some were actually crying, due to the emotional impact of the performance. Everybody sensed that they had witnessed something very special.

Pete Townshend has later remarked that many people today that haven’t seen Jimi Hendrix live really doesn’t understand how he was on stage, and what kind of force he was.

Hendrix aquired the 1968 Olympic White Stratocaster in November 1968. It has serial number 240981. He played it at Yale University at 17th of November 1968, and on Woodstock.

Mitch Mitchell sold the guitar in 1990 at Sotheby’s in London and got £198.000 for it. GAbriele Ansaloni sold it in 1993 for somewhere between $1.3 and $1.8 millon. It is now owned by Experience Music Project, and the funds to buy it were given by Microsoft co-founder Paul Allen.

The black strat that Jimi purchased in October 1968 must have been an exceptional instrument, because Jimi kept it with for for the rest of his career. It has serial number 222625, and was kept for 30 years by Jimi’s late girlfriend Monika Danneman. She took the last photographs of Jimi in the garden of her London flat the day before he died, and Jimi is actually holding the black strat on the pictures.

It is a standard black 1968 Stratocaster with a rare maple fingerboard. It lacks the «skunk stripe» on the back, due to the fact that the metal rod in the neck is put in from the front, and the fingerboard is glued on afterwards. Normaly the way Fender makes a maple fingerboard is to make neck nad fingerboard in one piece, and to make a slot in the back of the neck to put the rod in, and to fill the groove with a darker wood. It is of course a so called CBS strat, witch refers to the overtaking of Fender by CBS in 1965, and the instruments made in the 20 year CBS-period 1965-1985.

The guitar was played at the Roayal Albert Hall concert of February 1969, Atlanta Festival, the Band of Gypsys concerts, and the Isle of Wight festival. It is now owned by German guitarist Uli Jon Roth of the Scorpions, who had a 20 year relationship with Monika Danneman ending with her death in 1996.