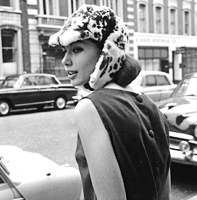 Linda Keith was a stricingly beautiful twenty year old model. She had been the girlfriend of Keith Richards from 1963, when she was just seventeen, and had witnessed the birth of The Rolling Stones. She was jewish, well educated, well off, and very interested in music. She used to travel with her set of blues 45’s. The Stones was to do a much anticipated US tour in 1966, and Linda had come over one month early, to check out the New York club scene.

It’s funny how things happen. It was a defining moment in the career of Jimi Hendrix when, in late May of 1966, Linda Keith and her model friends decided to walk into The Cheetah Club in New York, where Jimi was playing with Curtis Knight and the Squires. It was actually his last gig with the band, with whom he had been playing for 8 months. The Cheetah was a big place, it could hold up to 2.000 people, but this night it was around 40 people there, according to Linda Keith. She didn’t like the band much, but she was mesmerized by the guitar player. She thought he was a star, but an unusual one, and at an unusual place at that. After the set she invited him to join her and her friends at their table. I would have liked to see Jimi’s face when she told him she was Keith Richards girlfriend, and that the Stones were due to arrive in town in a months time.

Linda and her model friends sat out the last set and asked Jimi to join them back to an appartment at 63rd Street, where they discussed music, politics, and played records all night. Linda saw a great star in Jimi, she was maybe the first person to see his special gift, and she was convinced he would be a big star. She asked him why he played with Curtis Knight, and he said, «I don’t have my own guitar». Linda promised to get him a guitar. Linda also introduced him to LSD, and still tripping she played him Dylan’s new album Blonde on Blonde. He would play along with the records, and it was a special consert. He also played her his own songs, like «Red House» and many of scetches to songs that would end up on «Are you Experienced»

Jimi got his band Jimmy James and the Blue Flames together, and they were playing at the Cafe Wha? at the Village. Linda got The Stones to see them, along with Andrew Loog Oldham, Stones manager, and Seymour Stein. They were all unimpressed. Linda was trying very hard to get people interested in her protegeé, but with no luck. She felt she was grasping at straws, and started to doubt herself. But finally she struck gold with Animals bassplayer Bryan «Chas» Chandler.

On August 2nd 1966 Linda Keith and Chas Chandler made an appointment to see Jimmy James at the Cafe Wah? Jimi had been tipped that they would come, of course, and had put together an «A» set. Chas, 6’4″ and wearing a suit, was so excited when he heard the first song «Hey Joe», that he spilled milkshake on himself. «He was the best guitar player I had ever heard», he said later. After the set they got Jimi over to their table. Chandler couldn’t believe that nobody had already signed him. There was still a month of touring with The Animals before Chas could be back, but they made a gentlemans agreement to continue the project when Chas were finished touring, and said goodbye.

Linda and Keith Richards broke up during the time Chas was touring, and Keith alarmed Linda’s father that she was hanging out with bad company in New York. Mr. Stein arrived at the scene and brought Linda back to England. This made it difficult for Chas Chandler to find Hendrix when he finally came back to New York after finishing the tour with the Animals.

Jimi met Linda Keith again when he came to London. Just before his death he gave Linda a Fender Stratocaster as a token of his gratitude for everything she had done for him. She was a major catalyst in the career of Jimi Hendrix.